Please see our wiki's policies and guidelines here before contributing!
Welcome to the GetBackers Wiki!

Welcome to the GetBackers Wiki!
Your online source for all information on the manga and anime, GetBackers.
This wiki already contains 2,800 number of edits and a total of 118 articles since its creation on May 30, 2009‎ .
» Please do be aware that UNMARKED SPOILERS lie within! «
Rules & Guidelines • Manual of Style • Articles in Need! • Request for Adminship • Admins 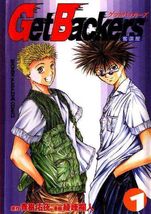 "Blonde, hip, pragmatic and cool, Ginji Amano has the power to generate currents with his body like an electric eel. Brunette, equally hip, bespectacled and rambunctious, Ban Mido has the mystically mysterious 'Jagan,' the power to create illusions in the minds of his foes. Together, they are the GetBackers, the best retrieval team in the world. They can get back anything taken from clients, and their success rate is (almost) 100%! However, first they have to get some clients—and soon—or this spry detective duo will starve on the streets!"

GetBackers 「ゲットバッカーズ -奪還屋-, Gettobakkāzu Dakkan'ya, lit. "GetBackers: Recovery Service"」 is a Japanese manga series written by Yuya Aoki and illustrated by Rando Ayamine. The series was serialized and is published by Kodansha's Weekly Shōnen Magazine from 1999 until 2007, totaling 39 volumes. The plot follows the "GetBackers", a group that retrieves anything that was lost. The team is primarily composed of Ban Mido, a man born with the illusionary technique the "Jagan", and Ginji Amano the former leader of a gang called "The VOLTS", a powerful group in the dangerous territory called the Infinity Fortress in Shinjuku.

The manga was adapted into an animated television series in 2002. The Studio Deen production aired on the Tokyo Broadcasting System from October 5, 2002 until September 20, 2003, for a complete run of 49 episodes. It was also dubbed in English and broadcast by the anime television network Animax across its respective networks worldwide. The series was licensed for an English-language release in North America by TokyoPop, which released 27 volumes between February 10, 2004 and December 2, 2008. It has since lost the license to the property, and all existing releases are now out-of-print.

MakubeX was found in a sack as a child. Only his last name, 間久部 (Makube), is known, for it was written on the bag itself. He later came to be known as MakubeX, the 'x' symbolizing an unknown variable, and his "name" is always written in romaji. MakubeX is a genius hacker, capable of manipulating computers to do whatever he pleases. He was originally taught by Gen but swiftly surpassed him in skill.

The GetBackers wiki has been recently adopted and is in the process of being cleaned up, organized, and undergoing a new theme/design. Bare with me as I restructure the main page and give the wiki a new and polished look.